Russian Helicopters Holding Company, forming part of Oboronprom Corporation, one of the global leading developers and manufacturers of helicopters, including a number of the most popular and wide-spread models, has presented new medium multi-role Ka-62 helicopter, the company’s press-service reports. AEX.ru
«We are excited to present the project of new medium multi-role Ka-62 helicopter at the Russian market, – said CEO of Russian Helicopters Holding Company, Dmitry Petrov. – The new helicopter combines traditional features of Russian helicopters – high reliability and excellent controllability. Special attention was paid to eco-efficiency and operating efficiency of Ka-62 during its development. I am confident that advanced capabilities of the vehicle will spark interest among our traditional customers and attract the new ones».
New medium multi-role Ka-62 helicopter is being developed using state-of-the-art technologies and advanced materials. Ka-62 has single-rotor design with multi-blade anti-torque rotor ducted into vertical tail fin. It is planned that the share of composites in the structure of blades and airframe will exceed 50%.
The presented helicopter may be equipped with two Ardiden 3G turboshaft engines with a capacity of 1680 horse power made by Turbomeca (France). Thanks to its modular design and two-channel Full Authority Digital Engine Control (FADEC) these engines are reliable, easy-to-operate and they have exceptionally low fuel consumption. The helicopter will also be equipped with “glass cockpit” developed by St. Petersburg-based Transas Company, Russian Helicopters explained.
Among other features of Ka-62 are five-bladed rotary wing, bypass duct of hydraulic system, heavy-duty wheel landing gear, strengthened design of the airframe and mounting attachments of the major components and shock-absorbing seats for the passengers and the crew.
Ka-62 is intended for cargo transportation, emergency medical aid, air works and surveillance; it may be used in oil-and-gas industry, for rescue operations and corporate needs.
The production of Ka-62 helicopters will be carried out by Progress Arsenyev Aviation Company. The first flight of Ka-62 is scheduled for August 2013. Acquisition of AR IAC type certificate and start of helicopter’s deliveries are scheduled for 2015. Russian Helicopters also intend to obtain EASA certificate for Ka-62 helicopter, the company noted. 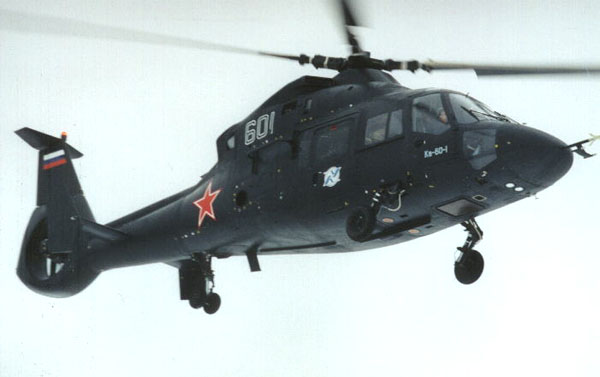